A+ a-
posted on 10/09/2017
The Festival gave out three acquisition awards for video works, a special prize money award, and five artist residency awards

In a ceremony held on the evening of October 8 at the Sesc Pompeia Theater, the 20th Contemporary Art Festival Sesc_Videobrasil gave out three acquisition awards for video works, a special prize money award and five artist residency awards.

The trophy sculpturefor this edition was created by the Brazilian artist Flávia Ribeiro. Deliberately avoiding the grandiose tone commonly imparted to objects in this category, Ribeiro conceived a palm-sized bronze bird which simultaneously evokes ideas of delicacy and freedom, flight and welcome. The reduced dimensions, the gold and the velvet convey the feeling of a small and subtly precious gesture, which the artist relates to the generosity present in both the work of art and the gaze that welcomes, distinguishes and rewards.

The 20th Contemporary Art Festival Sesc_Videobrasil runs through January 14, 2018 at Sesc Pompeia, in São Paulo, with exhibition of works, video programs, open lectures, meetings and talks with artists and curators. 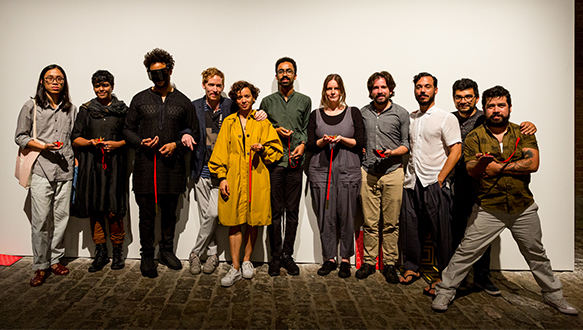 Below are listed the awards and winning artists:

Sesc Art Collection Acquisition Award. The following artists will receive R$ 25,000 each and their works will be included in the institution’s contemporary art collection:

Artist residency awards. Five artists were awarded and will take part in two-month residency programs in 2018-2019, with airfare, accommodation and per diem included.