The 21 editions of Videobrasil held over 40 years had one of the most important pillars in their awards. Through them, the event underscored its role as a driver for artistic production, far beyond a space for exhibition and debate. The awards axes varied over time, including categories that have adapted to historical contexts: from the time when the festival focused only on video to its expansion into the most varied artistic languages.

The awards granted also varied—whether in terms of the amounts offered, participation in artistic residencies, incorporation of works in important collections, among others—but they always included the handing of trophies commissioned by Videobrasil. These trophies, produced by guest artists, were never just objects of mere formality, and their design was linked to the themes and characteristics of the editions.

But it was especially after the 13th Biennial, in 2001, that the trophies were more properly included in a contemporary art commissioning strategy. According to Solange Farkas, it was the moment when Videobrasil started to look more closely at a production that goes beyond the universe of video, video art or electronic art. From there, the festival invited, in chronological order, the visual artists Carmela Gross, Raquel Garbelotti, Luiz Zerbini, Rosângela Rennó, Tunga, Erika Verzutti, Efrain Almeida, Flavia Ribeiro and Alexandre da Cunha.

See below the photos of each trophy and learn more about their creators. 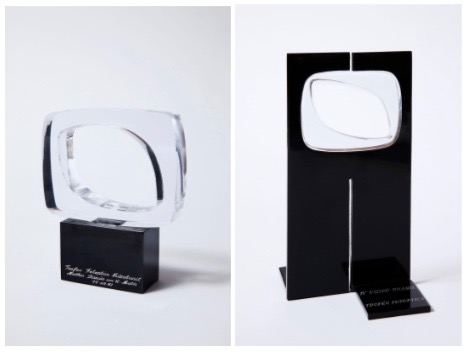 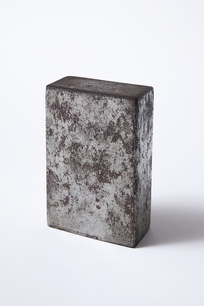 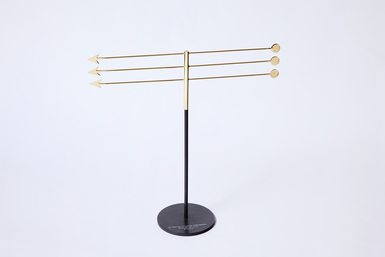 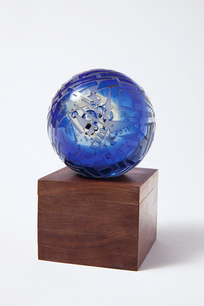 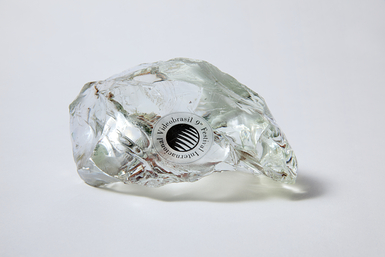 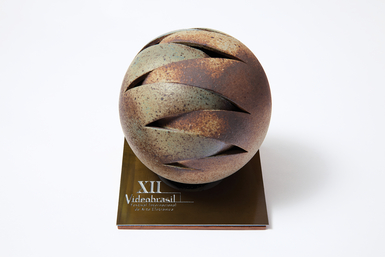 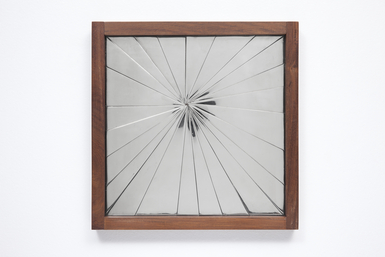 Carmela Gross is one of the leading artists of a generation that began to gain momentum in the 1970s in Brazil. Carmela's work stands out for its continuous investigation and experimentation of media and materials, characteristics that make it coherent with the moment of encounters and fusions that characterized the 13th Videobrasil. The artist has participated in exhibitions and biennials around the world (Mexico, Russia, Spain, among others) and has works in the collections of national institutions such as the Pinacoteca do Estado, Sesc-SP and MAC-SP, and international museums such as MoMA (New York) and the Museum of Fine Arts (Houston). 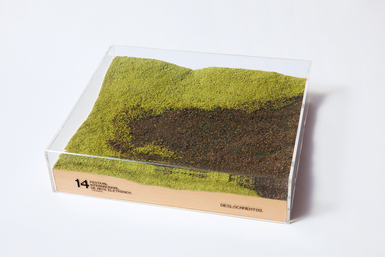 Raquel Garbelotti is an artist and professor. With a master's degree from the São Paulo State University (Unesp) and a doctorate from the University of São Paulo (USP), she works as a researcher in the field of site-specific, audiovisual and sculpture. She took part in several events in Brazil and abroad, including the 25th São Paulo International Biennial, the Panorama of Brazilian Art (2001) and the 26th Pontevedra Art Biennial (Spain), in 2000. In the trophy for the Biennial Sesc_Videobrasil, slices of landscapes from different places move towards each other, meet and blend without losing their identities. “I came upon the idea of the trophy thinking about the loss and conquest of a territory, which can be understood as the place we occupy.” 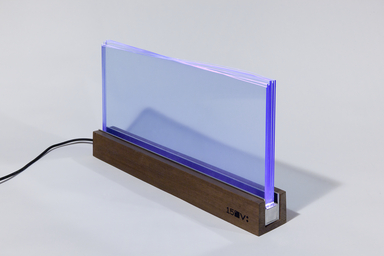 One of the artists who emerged in the 1980s, coming from the field of scenography and performance, Zerbini developed his language in the multifaceted use of media such as video, sculpture, photography, music, drawing, painting, graphic art, environments and installations. Creator of the Chelpa Ferro group, in 1995, he took part in the 19th and 29th São Paulo International Biennial, the 10th Mercosul Biennial, as well as exhibitions in France, the Netherlands, China and Portugal. He has held solo shows at the South London Gallery (London), at Mam Rio, Inhotim, at Instituto Tomie Ohtake and at MAM-BA, among other venues. He recently presented a large solo exhibit at Masp. To create the trophy for the Biennial Sesc_Videobrasil, the artist freely drew on his work “Atlântico” (2004). 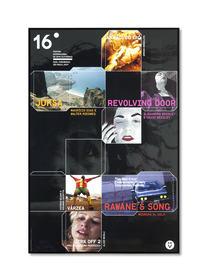 Rosângela Rennó presents a work that stems from photography to describe a path that reflects on the uses and places of the image in the contemporary subjectivity. The artist reframes the function of photography, both in the play she establishes between memory and oblivion, and through the manipulation of images and objects collected from various archives. She has participated in the São Paulo, Venice, Havana, Johannesburg and Berlin biennials; has held solo shows at Pinacoteca, Instituto Moreira Salles and Fundação Calouste Gulbenkian (Lisbon); and has works in the collections of MoMA (New York), Tate Modern (London), Reina Sofia (Madrid), Inhotim and Masp. In the trophy for Sesc_Videobrasil, she alludes to the advertising procedure that transforms key scenes from films into the static (and emblematic) images of movie posters—as old as cinema itself—; the trophies were created from award-winning works. 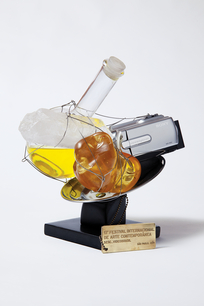 One of the most emblematic figures in Brazilian visual arts, Tunga (1952–2016) transformed objects into performance elements, creating analogies between body and sculpture. His work makes reference to different areas of knowledge, such as literature, psychoanalysis and science. He has participated in hundreds of exhibitions in Brazil and worldwide, including at the documenta in Kassel, at MoMA (New York) and at the São Paulo, Venice and Havana biennials. He has two individual pavilions in Inhotim. In the sculpture-object that he created for the Biennial Sesc_Videobrasil, elements from his poetic repertoire—such as crystal and amber liquid, contained by a metal mesh—, involve and intervene in the body and in the field of vision of a video camera. With its functioning preserved, the camera-trophy allows us to experience a gaze interfered with by the artist 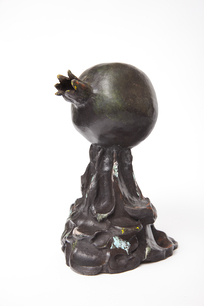 Erika Verzutti is an essential artist for understanding the practice of sculpture today, both in the Brazilian and international scenes. Verzutti's work—in papier-mâché, bronze, plaster, concrete and wax, among other media—is related to a kind of tropical bestiary and flora, where organic forms intertwine: animals, fruits, totems... most charged with erotic fertility. She has participated in the Venice, Genova, São Paulo, Lyon and Mercosul biennials, and has held solo shows at important institutions such as the Centre Pompidou, in Paris. The 18th edition trophy is a pomegranate-shaped sculpture. "The fruit was a natural choice when I was looking for a form from my familiar repertoire, and which was also celebratory,” the artist explains. “It's a precious shape, very expressive, sort of physiognomic, and also associated with luck.” 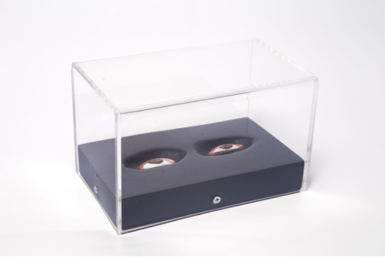 Imbued with a lyrical sense, Efrain Almeida's sculptures—whether in wood, bronze or fabric—subtly and silently address issues related to the body, sexuality and religion. Almeida frequently uses images of nature, the mythological universe and popular culture from the northeast, revealing his references. He has participated in the São Paulo, Havana and Cerveira biennials, and has works in the collections of MAM-SP, the Museu de Arte Moderna Aloísio Magalhães (Recife, Brazil) and MoMA (New York), among others. In the work proposed for the Biennial Sesc_Videobrasil, the artist updates a recurring symbol in his production—the eye—and transplants defining traits from the Brazilian popular culture into the context of contemporary art. 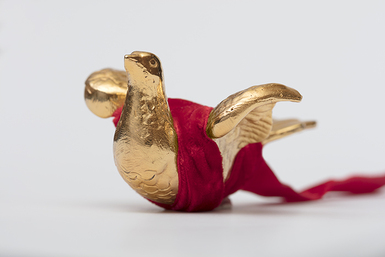 Flavia Ribeiro examines in her works the plastic and symbolic possibilities of matter. The transition from the two-dimensional to the three-dimensional, and the relationships between body and space are central to the artist, who works with printmaking, sculpture, installation and drawing. Bronze, latex, tin, wax, wood, plaster and velvet often appear in contrasting situations, when, for instance, a fine fabric rests on a piece of a different material (as in the trophy for the Biennial Sesc_Videobrasil), revealing to the observer the vigor of the qualities of each object and enhancing its tactile appeal. Among her main shows, Ribeiro has held individual exhibitions at the Pinacoteca do Estado, MAM-SP and the Instituto Figueiredo Ferraz, has been featured in group shows in the US, Italy, Puerto Rico and England, among others, and has participated in the São Paulo and Istanbul biennials. 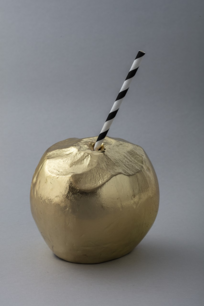 Alexandre da Cunha is a Carioca sculptor and visual artist based in London. By contrasting and mixing materials and by establishing dialogues between repertoires and objects of different origins, made for different uses, the artist critically operates within a scale of values that brings together pop culture, modernism and the decorative arts. Approaching widely diverse themes, he incorporated, in his latest works, humor, discarded materials and very simple technological resources, at times including the language of video. He has participated in the São Paulo, Venice, Prague and Liverpool biennials and has held solo shows in cities such as Bogotá, Brussels and Berlin. His works are in the collections of Tate Modern (London), Museu de Arte da Pampulha, Inhotim, the Cisneros Collection and the Pinacoteca do Estado. The trophy created by the artist for the last Biennial Sesc_Videobrasil establishes a conversation with the idea of national sentiment that American historian Benedict Anderson links to the end of the colonial empires, among other phenomena, in the essay Imagined Communities.