The dissemination of video and Videobrasil as a trailblazer

Between August 8 and 14, 1983, the 1st Festival de Vídeo Brasil* was held in São Paulo, at the Museu da Imagem e do Som (MIS). Focused on the recent and innovative video production that was disseminating across the country—resulting from technological, but also political and cultural changes—the event was a milestone in the national art scene. With an intense program carried out over seven days, it featured debates, screenings of video tapes (analog media used at the time for video production), a video fair, performances and an awards ceremony. With a challenging regard, still in times of dictatorship, and a somewhat underground spirit, the festival kicked off the forty-year trajectory of Videobrasil—which will be celebrated in 2023 with the 22nd Biennial Sesc_Videobrasil. 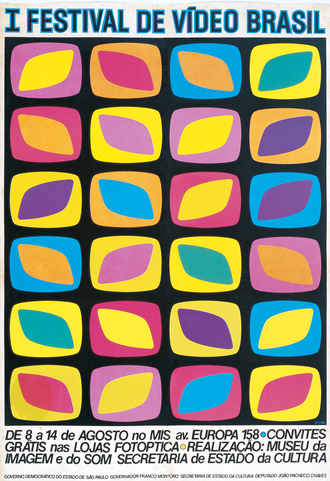 Spearheaded by Solange Farkas, then a young Bahian from Salvador recently arrived in São Paulo, the creation of the festival was encouraged by important names in the Brazilian cultural scene. Among them, the famous photographer and filmmaker Thomaz Farkas (1924–2011), at the time the owner of Fotoptica, which was starting to sell video equipment in Brazil. “In the early 1980s, video was emerging as equipment. There were cinema and television, but not what we call video,” Solange said in a recent interview with arte!brasileiros magazine. Brazilian production prior to this period, in the 1970s, was basically restricted to the circle around professor Walter Zanini who, after acquiring equipment abroad for MAC-USP, loaned it to artists such as Regina Silveira, Wesley Duke Lee, Carmela Gross, Julio Plaza, José Roberto Aguilar, Anna Bella Geiger, Leticia Parente, Sônia Andrade, Paulo Herkenhoff and Fernando Cocchiarale—today considered the pioneers of video in Brazil.

With the democratization of the medium—at a time of a crisis of Super 8 prevailing until then—other artists and groups began to experiment with new languages. Thus, more than an exhibition space, the festival itself became an incentive for the production of these young independent artists. “Thomaz realized that there was something big there and asked me if I wanted to do a show, or something like that, that would encourage artists to use video and to show their material.” And then, at the 1st Festival de Vídeo Brasil, participated some production companies such as TVDO and Olhar Eletrônico and a series of directors and artists such as Carlos Ebert, Eduardo Abramovay, Eduardo Escorel, Fernando Meirelles, Flavia Moraes, Isa Castro, Noilton Nunes, Rita Moreira, Ruth Slinger, Tadeu Jungle, Toniko Melo and Walter Silveira—many of whom would become famous in the following decades.

The headlines in the press at the time explain a little of what the event meant: “Video loses its mystery and gets a festival,” announced the Folha de S.Paulo; “From videomania to an alternative language,” the Estadão published; in the Jornal do Brasil, in turn, the title was “A new wave in the Pauliceia;” and on the Globo, “Festival at MIS points to new paths for video in the country.”

The relationship between video—and the festival—and TV had distinct nuances. On the one hand, one of the roundtables was precisely called “TV Memory” and addressed the need to preserve the most significant material in the historical production broadcast on this medium. There was also the fact that some video production companies were starting to gain space—nonetheless negligible—on network broadcasters, which was discussed at the table entitled “TV - Technique and Language.” But, in general, the tone of the festival was critical of the monopoly of network TV, a field virtually closed to this new art. The video was still looking for an exhibition channel consistent with what was advertised as a new language, as Solange explains. “The prejudice against video, even within the arts scene itself, was blatant,” she recalls. The festival emerged, therefore, as one of these possible exhibition channels.

For that edition's Competitive Exhibition, 36 works were selected (7 VHS and 29 U-Matic) among the 78 entries. The topics covered were diverse, from the punk scene in São Paulo (Garotos do Subúrbio) to the election of Leonel Brizola as governor of Rio de Janeiro (Arquive-se), or the situation of homeless people (A Dama do Pacaembu) or topics related to football (Teleshow de Bola), music (Gang 90: Eu sei mas eu não sei) and more notably fictional experiments (Brasil, Paula Z). The big winner of the edition was Caderneta de Campo, a collection of manifestations by the theater group Oficina Uzyna Uzona, led by director José Celso Martinez Corrêa: rehearsals, marches to prevent the expropriation of the building where they rehearsed and the controversial participation of Zé Celso in the Gramado Film Festival. Marly Normal, Garotos do subúrbio and Brasília, by Olhar Eletrônico, Frau and Quem Kiss teve, by TVDO, among others, were also awarded.

In addition to the Screening of Video Tapes in Competition, an exhibition with hors-concours works highlighted dozens of other videos on the most diverse themes and the most varied languages—from news reports to “video poetry.” Finally, a small parallel exhibition highlighted some works that “experience important trends in the more recent production” and, notably, works on the production of filmmaker Glauber Rocha, who had died just two years earlier. There was a testimony by Glauber taken in Lisbon in 1981, directed by Viva Auder, and a long show directed by Paula Gaitán and TV Bandeirantes. According to the text of the festival's catalog, Glauber's work opened up “new perspectives for a different use of video.”

Given the themes of the works, it is not difficult to imagine that the festival did not go unnoticed in the eyes of the government. In the last years of the civil-military dictatorship that haunted Brazil for two decades (1964–1985), the event had to submit works to the censors, and had problems with it. Programa do Ratão, for example, a work that satirically re-edited the institutional film O esclarecimento sobre tóxicos [Clarification on Drugs], produced years earlier at the University of São Paulo, was confiscated by the control agency at Brasília and could not be shown.

A remarkable moment in the event was the performance that opened the 1st Festival de Vídeo Brasil, on August 8. Created by Otávio Donasci, Cavaleiro do Apocalipse [Knight of the Apocalypse] used the language of video theater to portray “the despair of the world and/or Brazilian situation.” Concretely, the artist left Avenida Paulista riding a horse and, with a black cloak on his back and a TV monitor attached to his head, crossed the streets of São Paulo headed for MIS. As the Jornal da Tarde article joked at the time, the Knight of the Apocalypse announced not the end of times—mentioned by Donasci—but the opening of the 1st Festival de Vídeo Brasil.

1. Poster of the first Videobrasil, by Kiko Farkas.