After the end of the dictatorship, Videobrasil reflects the new Brazilian reality and opens up to the world

In 1986, Videobrasil was already incorporated into the country's cultural schedule. Held annually at the time, it was awaited by video makers, production companies, artists, TV executives, the public and the press. Perhaps that is why the 4th Festival Fotoptica Videobrasil* attracted so much attention, with a record number of submitted works, a large audience at screenings and wide coverage by the specialized media. It can also be said that, in addition to the prominence that the festival had already achieved, some particularities of this edition made it a remarkable event: among them, a great performance by José Roberto Aguilar; the step taken towards the internationalization of the event; and even a controversy at the awards ceremony. 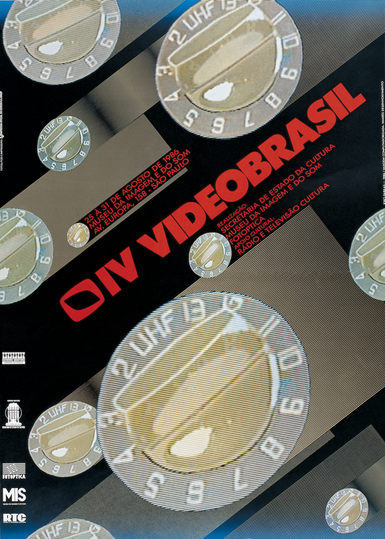 Held between August 25 and 31, 1986, once again at the Museu da Imagem e do Som (MIS) after a year at Teatro Sérgio Cardoso, the fourth Videobrasil opened with “a wild performance by Aguilar,” as the newspaper O Estado de São Paulo described it at the time. In a — somewhat satirical — tribute to the work of Bulgarian artist Christo, known for wrapping buildings, bridges and even stretches of beaches, Aguilar covered the recently renovated museum with hundreds of meters of black plastic and unwrapped it in front of the audience from São Paulo. It was a “metaphor for the unveiling of the gaze,” according to the artist. “Unwrapping MIS transforms the museum into a new object for the public, something similar to how I feel about video works, always a discovery.” At the festival, Aguilar would also be on the spotlight with the exhibition O Olho do diabo, curated by Lucila Meirelles and Walter Silveira, and dedicated to his electronic work, produced between 1974 and 1984, one of the most innovative and experimental productions of the first phase of video in Brazil.

Another peculiarity of the festival that drew one’s attention was the focus given to the international works. If foreign pieces hadn’t yet taken part in the competitive exhibition (which would happen in the eighth edition, in 1990), parallel exhibitions brought works from five countries to Brazil, most of them unpublished here. From Germany, the screening entitled Alternativas de Vídeo, organized by Munich' ‘ Goethe Institute, brought together seven non-commercial productions with a strong political and social charge; from Canada, the Recent Canadian Video exhibition also brought together seven works, made by artists who were part of the 14th São Paulo Biennial, in 1977; from France, around 30 videos produced between 1982 and 1984 were shown; the English show, in its turn, the result of a partnership with the British Council, featured a selection of 18 videos by independent filmmakers produced by London Video Art.

A much broader selection, curated by Tadeu Jungle, was presented at the North American exhibition. Eighty works were screened, from the Video Data Bank, in Chicago, at the time one of the largest distributors of video art in the US. The program was divided into eight series that addressed such themes as modern life, contemporary artistic languages, women's issues and the works by the musicians John Cage and Laurie Anderson. Jungle's text in the festival's catalogue was emphatic about the significance of the exhibition: “We know nothing about international video production. There are no accessible publications. Poor colleges and universities. Neglect. Twilight of a modus kulturalis. (...) The Mostra Norte-americana de Vídeo Contemporâneo is held for the sake of information. Feeding towards alternatives. The search for oxygen continues. Receive and broadcast. Free transit of information.”

Even with the great prominence of these international exhibitions, the public's attention continued to be focused — as in the first years — mainly on the Competitive Exhibition, which mobilized Brazilian artists hailing from an increasing number of regions of the country. The fourth Videobrasil had 192 submissions, a record number until then, but focused on a more rigorous selection process to pick its 40 competitors (in 1985 there had been 60). Among those chosen were works by Carlos Porto, Christine Mello, Eder Santos, Francisco César Filho, José Luiz Nogueira, Laís Guaraldo, Luiz Algarra, Luiz Claudio Lins, Moysés Baumstein, Tata Amaral and a series of others that will be mentioned below.

The production presented, according to the jury's assessment, tended less towards fiction — a focus of the previous year — and moved mainly towards experimental and documentary pieces. From the first genre, works such as Mergulho, by Marina Abs, can be highlighted, a video that dilates the time of a diver jumping; and A pedra ouve passar o vento, by Leonardo Crescenti, a video art piece with close-up images of dancers' bodies. In addition to those, attention was drawn to the large number of music video and other works related mainly to 1980s pop rock, such as Autorretrato, by Ana Maria Escalada and Katia Penn, which features testimonials and performances by Arnaldo Antunes; and Extasis, by André Martirani, Caio França and Conecta Video, which records the Brazilian tour of German star Nina Hagen. Music videos included Música Urbana (from the band Capital Inicial), produced by FACHA and Malu de Martino; Lena (Camisa de Vênus), directed by Toniko Melo and Olhar Eletrônico; and Farofada (Ultraje a Rigor), by TV Viva.

Some of the featured documentary works included Hia sá-sá-hai yah, by Olga Futemma, a video that tells the story of immigrants from Okinawa (Japan), and shows the role of dance and music in preserving their identity; Do outro lado da sua casa, by Olhar Eletrônico, a report on homeless people carried out by a cardboard collector; Contrário do Amor, by Jacira Melo, about domestic violence against women; and 100 terra, by Geraldo Anhaia Mello and Paulo Baroukh, a mini-documentary about a landless workers camp in Pontal do Paranapanema. The works reflected a paradoxical reality of the country, on the one hand characterized by a more democratic atmosphere — after 21 years of civil-military dictatorship (1964–1985) — while on the other, strongly marked by inequality, extreme poverty and social violence.

The controversy at the awards ceremony resulted from a last-minute change in the rule that established separate awards for VHS and U-matic works (the two main video production technologies at the time). Claiming that the works on VHS were of poor quality, the jury awarded two U-matic videos — the aforementioned Hia sá-sá-hai yah and VT preparado AC/JC, by Walter Silveira, Pedro Vieira and TVDO. The press demanded a response by the organizers, and called the occurrence “shameful.” In the newspaper Folha de S.Paulo, another article said that the works presented in this edition had “technical refinement without originality.” But the wide media coverage was, in general, positive, as can be seen in an article featured in the newspaper A Tarde — 4th Videobrasil was a celebration of creativity — or in the review of the newspaper Estadão, by Cláudio Ocri, for whom “setbacks did not undermine the success of the festival, (...) which marked another stage in the history of video in Brazil.”

Another initiative of the fourth Videobrasil was the presentation of works by TV Bixiga and TV Pelourinho, created by residents of the districts of São Paulo and Salvador, respectively, and which portrayed the life, background and cultural activities of those places. A small space at MIS, named Video Bar, also featured a small exhibition on computer graphics, “increasingly incorporated into urban-televisual everyday life” — as the text in the catalog describes it. Entitled Videographics, the exhibition screened works by specialized companies such as Art Sistemas, Neo Comunicações, Palette, Pixxel and Vetor Zero. There was also an exhibition curated by Roberto Amado and dedicated to the innovative work of photographers Milton Montenegro, Carlos Fadon Vicente and Kenji. Alquimistas da imagem showed the works of these three artists who were only just starting to work with computerized images, attempting to expand the limits of what photography was until then. Otávio Donasci, an memorable figure in previous editions of the festival, was once again present with his performances of the videocriaturas.

The debates and seminars, in turn, delved deeper into the issues raised at the third Videobrasil. Coordinated by Gabriel Priolli, Paulo Nasser and APTI (the São Paulo Association of Independent Video Producers), they followed up on the discussions on the democratization of broadcasting media and the fight against the monopoly by large communication groups — linked to the campaign for the concession of a UHF channel for independent producers, Antena Livre. Another round table, coordinated by Alberto Baumstein, discussed policies for financing cultural production. In this sense, an achievement of the industry was holding, at the festival, the 2nd Prêmio Estímulo de Vídeo, sponsored by the Secretariat of Culture of the State of São Paulo, which selected ten scripts and financed the production of the works. In this way, video continued to conquer the “official spaces,” linked either to network TV or to the Federal Government.

There was no way back for video beyond the independent universe, as it's made clear in the text by Roberto Muylaert, then president of Fundação Padre Anchieta, in the catalogue of the festival: “One of the most frequent questions I’ve been hearing is whether or not there will be space on TV Cultura for new TV professionals and independent producers. More than a mere answer, this question leads to a broader statement, a postulate: TV Cultura itself needs to be an independent production company, in the truest sense of these words.” The rapid transformations experienced in the first half of the 1980s were also described in the text by Henrique de Macedo Netto, Vice President of Fotoptica: “Only in its fourth edition, Videobrasil is already the most important vehicle for independent video production in Brazil. Many producers, based on the work they presented at this festival, have already become professionals and found space even on commercial TV.”

1. Poster of the forth Videobrasil, by Kiko Farkas.