Racism, the Indigenous issue, homophobia and the rise of evangelical churches are approached in the videos of the sixth festival

To watch the videos presented in the first editions of Videobrasil, held in the 1980s, is to come across visuals and languages that transport us to another period in the history of Brazil and the world. After all, in addition to reflecting another political, social and cultural context, the works were carried out with technologies and techniques quite different from those used in the audiovisual field today. In the case of Brazil, however, several of the topics addressed remain extremely current, reflecting a country full of ills that continue to this day: poverty, inequality, police violence, precarious working conditions and even, in recent years, the return of famine and threats to democracy. In this sense, looking back, it is possible to say that the 6th Festival Fotoptica Videobrasil* draws attention for having presented works with extremely contemporary themes, which are still important in the debates in society and in the cultural environment. Among them, systemic racism, the Indigenous issue, homophobia and the rise of evangelical churches in Brazil. 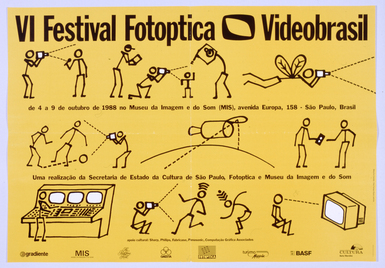 Held from October 4–9, 1988 at the Museu da Imagem e do Som (MIS), the edition had 174 works submitted, of which 35 were selected for the Competitive Exhibition. Among them, Raça Negra, by Nilson Araújo, a documentary about the state of black people in Brazil, from slavery to the present day; Wai’a Xavante, by Paulo César Soares, an experimental visual essay on the expression and choreographies of the Xavante Indigenous people; Temporada de caça, by Rita Moreira, a video that explores the narratives created around a wave of homophobic crimes that took place in São Paulo; and Duelo dos Deuses, by Pedro Vieira, a report on the growth of evangelical churches in Brazil, with excerpts from their TV programs. These were themes that, in different ways, related to the issues addressed in the new Constitution, enacted precisely during the week of the festival, which re-established democracy in Brazil once and for all.

Another important axis among the selected works were those related to music, especially the music videos, which just then were starting to appear on television programming and that leveraged the careers of young national bands. As in the previous year, the Cariocas Sandra Kogut and Roberto Berliner continued to stand out, with two award-winning works in this edition: the music video Juliette, in which Fausto Fawcett and Fernanda Abreu mock the format of TV news; and Andréa androide—a poem by Chacal set to music by Ricardo Barreto—produced in partnership with Eder Santos, a visual experiment with collages in a science fiction setting. The duo also presented the documentary V o Vídeo, shot during the tour of the band Paralamas do Sucesso, and, outside the video exhibition, Kogut exhibited her video installation Cabine de Vídeo #2. The work, a space with a sofa and a monitor that displayed images to the sound of Brian Eno, was the beginning of the series of Videocabines the artist would execute in the following years.

Still in the Competitive Exhibition, among the works most closely identified with the language of video art, two stood out: the award-winning Mentiras e humilhações, by Eder Santos, in which a woman recites the poem Liquidação, by Carlos Drummond de Andrade, while the camera roves around the rooms of an uninhabited house; and II Movimento de Abertura da Sinfonia Panamérica, by Lucila Meirelles in partnership with Grima Grimaldi Pichi Martirani and Walter Silveira, based on the book PanAmérica (1967), a novel by José Agrippino de Paula deemed central for the rise of Tropicália. The video was described as “a three-videotape concerto for one monitor”, as the images were split into three parts on the screen.

Whether in documentary or experimental, commercial or artistic works, professionalism prevailed over amateurism in the jury's choices. In a text for the newspaper Jornal da Tarde, Gabriel Priolli, a member of the jury at that edition, stressed: “The festival's organizing committee considers that the independent video production market is consolidated in the country, has established ties with television and advertising, and has the respect of the entire audiovisual sector. Therefore, there is no room anymore for indulgence or paternalism for good ideas that are poorly executed or for high-level productions that hold back on going beyond the conventional. Competence is the minimum required, but what’s rewarded is creativity.”

The realization of a maturation, almost unanimous among participants, regulars and the press as a whole, was questioned by some, as usual. One of the harshest opinions came from another article in the Jornal da Tarde, entitled “Videobrasil, skating on the doldrums.” One excerpt read: “On the opening night of the event, the audience sat impassive, incapable of booing or applauding—almost a confirmation for the hypothesis that video is as instantaneous and disposable as one-way packaging.” The fact is that the article—which began by ironizing the “strategically standing up” hair of videomakers—seemed to distil, more than criticism of the works, a certain prejudice against the new generation of video and its way of being: “At the annual meeting of the caste of videomakers, they were pleased to sip drinks and discuss the quandary of independent production.”

Continuing the internationalization of Videobrasil, which had already secured relevant foreign exhibitions in the previous two years—featuring names the likes of Nan June Paik and Ira Schneider—the sixth festival held programs showcasing works from England, Germany and the US. The highlights were the North Americans Mindy Faber, Aysha Quinn and Daniel Minahan. The first, curator and director of Chicago's Video Data Bank, chose works of video art that showed dystopian worldviews. Among them was Control Break, by Faber herself, a video that showed a futuristic and at the same time fascist America, a nation of people condemned to impotence. The exhibition dedicated to the director, performer and actress Aysha Quinn—curated by Geraldo Anhaia Mello—was a retrospective with seven of her experimental videos made in the 1970s and 1980s.

Finally, the screening dedicated to the young director Daniel Minahan—today a renowned director of major TV series—presented two of his works in which reality and fiction were stitched together. The following year, Minahan would organize the first screening of Brazilian videos in New York, at The Kitchen, entitled Videobrasil Social and Experimental Tapes. Curated by Solange Farkas and Marcelo Machado and with works by Tadeu Jungle, Olhar Eletrônico and TV Viva, among others, it would be an important step in the dissemination of Brazilian production in other parts of the world. Still on the way of internationalization, another initiative that marked the sixth edition of the festival was the granting of a scholarship in the US to Pedro Vieira and a trip for Rita Moreira to participate in the 10th Festival Internacional del Nuevo Cine Latinoamericano, in Cuba. It was the beginning of Videobrasil's policy of rewarding artists with trips, scholarships and artistic residencies, which became a central axis in the work of cultural institutions to further the careers of young artists.

Another striking novelty was Videojornal, a daily bulletin produced in partnership with TV Gazeta and dedicated to the festival's program. Produced inside the museum, it was a kind of informative and relaxed coverage of the event. Directed by Hugo Prata, texts by Gabriel Priolli, camera by Anhaia Mello and hosted by Astrid Fontenelle, the bulletin included interviews with artists and the audience, retrospectives, in addition to broadcasting the awards ceremony. The Videojornal was produced in a mini-studio with super-VHS equipment and transmitted the images to most of the 80 monitors spread around the MIS during the festival. Starting that year, the practice of recording interviews with the artists became a staple, resulting in a vast amount of material that integrates the Videobrasil Collection alongside the video works.

It is also worth mentioning that during the sixth Videobrasil, Arlindo Machado launched his book A arte do vídeo (Editora Brasiliense), the first in a series of essays that the researcher and art critic would publish on the subject. The work is of notable importance due to the fact that Machado was the first scholar to study the Brazilian video production, especially that carried out in the 1980s. Finally, Videobrasil's itinerancy project, started in 1987, continued and took the award-winning videos to selected cities in the states of Rio de Janeiro, Maranhão, Acre, Bahia, Minas Gerais, Paraná and Rio Grande do Sul.

In the year in which the new Constitution was enacted, and as the first direct election for president after nearly three decades drew nearer, the Videobrasil of 1988 responded to an uncertain, but hopeful, moment in the country. Thomaz Farkas’s text for the catalogue imparts some of this feeling: “Thanks to the festival, we’ve noticed, when going through exhibitions, video rooms and cinemas, a renewed interest in 'non-long' material, such as music videos, short films and documentaries. Instead of a dwindling, discouraged, apathetic audience, we’ve found packed halls, interested people, questioning, applauding, vibrating. (...) There is an atmosphere of renewal and, why not, irreverence in the air. Is this a sample of a general state of mind? Is it a new hope? Maybe it's an optimistic, ‘uplifting’ contestation, a change of heart. We hope so!”.

1. Poster of the sixth Videobrasil, by Kiko Farkas.