One year after the I Festival de Vídeo Brasil, significantly impacting the national scene in 1983, the 2nd Festival Fotoptica-MIS de Vídeo Brasil was held in São Paulo between August 20 and 26, 1984, once again at the Museu da Imagem e do Som. Following the format of the first edition and expanding its scope, the event again had a screening of video tapes (analog media for video production used at the time) in competition; an out-of-competition video tapes screening; workshops, debates and round tables; the presentation of video installations and a small exhibition of “electronic caricatures;” in addition to a performance by Otávio Donasci in the event’s opening. Among the new features were an incipient international exhibition and, notably, the Vídeo Mercado [Video Market], a kind of trade fair for producers, broadcasters, magazines, video clubs and cultural institutions to exchange experiences and close deals. 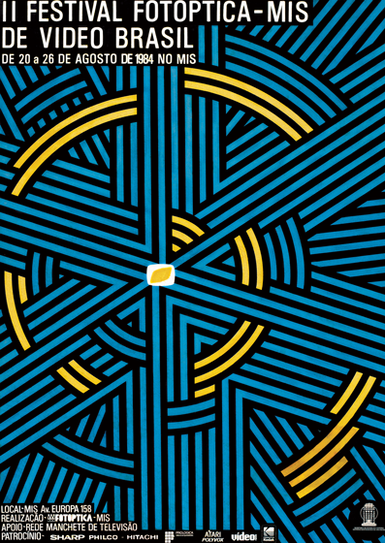 Far beyond merely following the technological changes that were noticeable year after year, Vídeo Brasil (as it was spelled at the time) ran parallel to a moment of engagement and strong changes in Brazilian society, with the Diretas Já [Direct Elections Now] movement, the growing demand for re-democratization and the consequent—and troubled—process of political opening. The effervescence was already noticeable in the event's introductory texts: “The 2nd Festival coincides with a period of transformations in our country—economic, political and social. We remain curious and alert, more demanding and dissatisfied, and we want to know things now. We are today a more bruised and critical audience, and we want to see both sides of the coin,” argued the photographer and filmmaker Thomas Farkas, then president of Fotoptica, the main sponsor of the event.

On the screen, topics related to the democratic struggle permeated several of the videos shown; in some cases implicitly, while in others quite directly—which again resulted in problems with censorship, in force in Brazil until 1988. Still, productions such as O silêncio - Maluf inédito, in which the former mayor of São Paulo and then deputy is shown in a long silence when asked by journalist Miriam Leitão if "Minister Delfim is a useless technocrat;" Diretas na Sé, by Roberto Elisabetsky, which records the rally that brought together more than 300,000 people in São Paulo demanding direct elections for president; Rio em Fevereiro, by Tuca Moraes, also shot in a march in early 1984; and Pra quê o título?, a work that addresses a character's struggle to reintegrate into society after 20 years in isolation due to political repression.

According to Solange Farkas, founder and director of Videobrasil to date, the critical tone in regards to network TV, which was evident in the first edition, toned down in the second year, as independent producers and video directors began to approach the country's broadcasters. Collectives became professional and entered—albeit timidly—the previously inaccessible spaces on broadcasters of the likes of TV Cultura, Manchete or Gazeta, airing shows such as the famous Fábrica do Som (TVDO) or the Ernesto Varela reporter sketch, a character created by Olhar Eletrônico.

There was some hope in the air, as can be seen in the text of the then Secretary of Culture of the State of São Paulo, Jorge da Cunha Lima: “This festival is a small sample of this world that multiplied after the funeral of the Super 8. It could be the big step towards an independent production that will make the democratization of telecommunications in Brazil irreversible.”

The press and the critics

Press coverage was once again intense, just as in the previous year. The Estado de S.Paulo announced: “Video is here to stay;” in Folha de S.Paulo, the headline read “Festival wants to open the doors of the market to independent video,” with a secondary article entitled “From quiet Maluf to the ardent kiss, a great show.” With the debut of the international exhibition—which presented works by important names such as the Korean Nam June Paik and the German Ulrike Rosenbach—the festival also got coverage by international media. Among them, the Italian Videomagazine highlighted: “Independent video in Brazil is stirring the waters, arousing interest and enthusiasm.”

The festival was also not immune to criticism, at a time of intense debates in cultural magazines and newspaper sections. If Rubens Ewald Filho claimed that the edition was a success, the title of the article by Gabriel Priolli was less favorable: “Too much praising in the audience and amateurism on the screen.” The bulk of the criticism revolved around the perception that artists and producers had not yet managed to develop their own language for video, showing limited creativity in the use of new equipment.

With the vertiginous growth in the number of films submitted, works of varied technical and creative levels were indeed a reality—which could be seen as a desirable result of the democratization of new equipment. If 78 videos were submitted in the first festival (with 36 selected for the Competitive Show), in the second edition, 120 were submitted and 60 selected. Among them were works from various regions of Brazil, by artists such as Alfredo Nagib, Artur Matuck, Carlos Ebert, Celso Fioravante, Eder Santos, Gil Ribeiro, Leonardo Crescenti, Lucila Meirelles, Marina Abs, Noilton Nunes, Olhar Eletrônico, Pedro Vieira, Rita Moreira, Ruth Slinger, TVDO and Walter Silveira.

Among the varied themes addressed—in addition to those already mentioned linked to the struggle for political opening—were mostly works that referred to the social situation in Brazil, technological changes and behavioral and sexual freedoms—from news pieces to more poetic and experimental works. Of the ten works awarded by the jury, the first were: Ivald Granato in performance, by Tadeu Jungle and TVDO, a film that accompanied the chameleonic visual artist in urban environments; Lixão do Alvarenga, in which journalists Caco Barcellos and Kico Gemael portray the extreme poverty of the people living in the Alvarenga landfill; Beijo ardente - Overdose, by Flavia Morais and Hélio Alvarez, a vampire story that blends horror and comedy; and the big winner of the festival, Eletricidade, by Alfredo Nagib, Eletroagentes and Videoverso. In this short poetic documentary, human beings are manipulated by remote control, in a work that outlines a futuristic vision of electricity drawing on the musical universe of composer and performer Kodiak Bachine.

1. Poster of the second Videobrasil, by Kiko Farkas.